“Creation exists only in the unforeseen made necessary.” 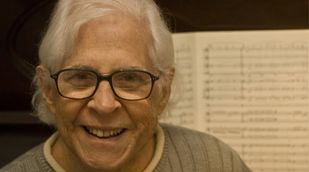 Pierre Boulez, who passed away Tuesday,  reportedly made that statement, an incredibly succinct description of the thrust of a visionary artist.  Time will be the rock that will filter the water of his contributions to music in the last 60 years.  His influence on  music professionals has been incalculable, especially on those who like me love the creation and promotion of new music.

The last few weeks have been extraordinary in that three major composers who revolutionized the concept of art music have passed away in close succession.  It is a good time to reflect on “the unforeseen made necessary” as we also honor the life work of John Eaton and Gilberto Mendes, who passed away on December 2 and January 1st respectively. Rumor has it that Eaton and Boulez did not see eye to eye as to what the new direction of music should be. This could be proof that the universe has many dimensions where many unforeseen things can become necessary simultaneously. Mendes would be chuckling with his very special wit.